Belgian beers are often called gourmet beers due to their complexity, diversity of flavours and affinity with food. So when I came across a special on 12 Belgian beers online, I snapped it up as a Father’s Day present for myself.

First up was Lindemans Cassis Lambic, a lower alcohol (3.5%) blackcurrant beer that has a winey, tart flavour. The addition of fruit or syrup to lambic creates a fruit beer that is sweet and sour. Lindemans Cassis had an aroma like Ribena, a semi-sweet flavour and a slight sour finish with a woody note. 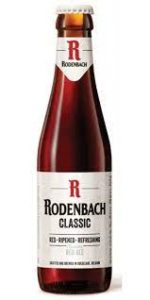 Belgian red ale is tart to the point of sourness but has a complexity of flavour from aging in oak. My dozen included a Verhaeghe Duchesse De Bourgogne that was vinegary, puckering and dry with prunes in the aroma and taste. It also had the definitive red ale, Rodenbach Classic, a deeply sour ale blend that pours a hazy brown colour with a small beige head.

The Trappist family of beers are made by monks. Top fermented, strong, complex and fruity, these beers make a unique contribution to the world of beer. So much so they have an appellation and a hexagonal trademark to protect their reputation.

Chimay is the best known and biggest-selling Trappist beer and their core range is named after the colour of their caps. The Chimay Capsule Bleue (known as Grand Reserve when in the 750ml cork and wire bottle) is a world classic. This port-like beer is a weighty 9% with yeast, banana and spice in the aroma, silky smooth body with caramel and raisins in the taste, and a spicy, dry finish.

The three Trappistes Rochefort beers are simply called 6, 8 and 10 after the old Belgian naming system for specific gravity. Rochefort 6 is an example of a Belgian Dubbel – rich, malty with a mild hop bitterness. The Rochefort 6 in my dozen was light reddish brown, soft bodied with a deep fruitiness, and a warming 7.5% abv.

The success of Trappist beers has spawned another category – Abbey beers. These are similar in style or presentation to Trappist beers but are either produced by non-Trappist monks or by a commercial brewer.

Leffe is one of the best-known due to its distribution by Interbrew, a subsidiary of the Anheuser-Busch InBev corporate behemoth. The Leffe Tripel is golden, spicy and fruity. At 8.5% it is a delicate and complex with banana in the aroma, some sweetness in the taste and a creamy finish with some alcohol.

The next step up is a quadruple (or quad) which is (surprise, surprise) a bigger and bolder style of beer of between 9% and 14%. Typically dark red or ruby brown, quads are full-bodied with a rich, malty palate, and slightly on the sweet side. My selection had one, St Bernardus Abt 12, which had a Belgian ale aroma with some dark fruit and alcohol, roasted malt and dark fruit flavours and a dry, funky and fruity finish.

A reasonably new Abbey beer (2009) from Corsendonk is Tempelier, a dark ale of 6%. It was copper-coloured, with a yeasty aroma of caramel and dried fruit, a sweet raisiny taste as well as an aromatic hoppiness. 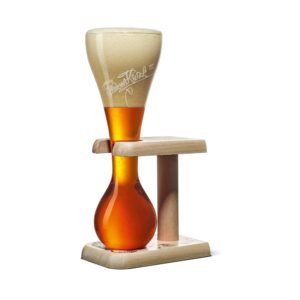 Strong Dark Ale is the next step up, higher in alcohol with fruity and dark malt flavoirs, they are often spicy and alcoholic. My box had two of these. Golden Carolus Classic had an aroma of caramel and raisins, a full and soft body, flavours of cocoa, toffee and caramel, and a warming alcohol finish. Gulden Draak was also malty and full but was heady and alcoholic in aroma (10.5%), and had a firmer malt body.

Strong Golden ale is a unique Belgian style with Duvel being the most well-known brand. Delirium Tremens doesn’t have the finesse of Duvel but is also strong with a fruity aroma and pours a dense white head. The 8.5% is noticeable in the finish.

There are a range of regional specialty beers in Belgium and my selection included Pauwel Kwak from East Flanders. Most often noted for its showy, branded mini yard-glass and holder, Kwak is golden brown with a sweet, caramelly aroma and a drying hop flavour. The finish is sweet, banana-like and warm from its 8.4% abv.

Belgium has the greatest number of native styles of beer and were a big part of the Wellington beer scene back in the 1990s. So this dozen was good trip down memory lane.

How to save hospitality, a brewer’s perspective