The first brewery out of the gates with a strong bike theme was Rotorua’s Croucher Brewing.

The brewery was well-established when it did a brand audit five years ago and decided to move away from their old brand – a large C on a stylised shield. 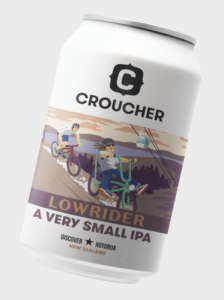 That logo shrunk on the label to make room for illustrated scenes from Rotorua’s many adventure sports, with mountain biking and cycling imagery a core part of the new brand.

For founder Paul Croucher, it’s about connecting to the local community and identifying strongly with Rotorua.

“You know how craft beer evolved through hipsters down in Wellington? Well in Rotorua, it evolved through the adventure sport guys – mountain bikers, white water rafters,” Croucher explains.

Croucher goes a step further and is an active sponsor of mountain biking events in the area. And when he says sponsor, it’s more along the lines of supplying beer for competitors to refresh themselves after they’ve crossed the line.

“We sponsor every event we can down here. We’re not exactly a cash-flush business but a lot of events just want a free beer at the finish line. It’s amazing how grateful people are. We just hope to send away people with a fond memory of our beer and maybe they’ll buy it again.”

Local community plays a big part in many other brands with a MTB connection.

In Wellington, Double Vision Brewing were partly drawn to their Miramar location by the mountain bike tracks in the area, says co-founder Warren Drahota,

“We’re all into mountain biking at Double Vision and when we were looking for different sites to set up in, we scouted a few including Brewtown in Upper Hutt, but what we found in Miramar was an awesome community — and a whole lot of bike trails a couple of blocks away.”

The Miramar Track Project takes in the area around the old Mount Crawford prison on the end of the peninsula, with track names such as Repeat Offender, Jail Break and Solitary.

Before they’d even opened the brewery, Double Vision had a beer called Repeat Offender, which featured a rear view of a mountain biker jumping over a police car. But when Drahota did a bit more research, he found Mount Crawford used to be mixed gender prison, so they reworked their artwork to have a woman on the can.

Having a woman on the beer was an important connection for American-born Drahota, who grew up idolising his cousin Karen Tremaine, who was one of the best riders in the US at the start of the century, contesting World Cup events.

There’s also a strong female presence on the Miramar tracks.

“We have heaps of riders in Miramar but the number of phenomenal female riders is high compared to other places I’ve been mountain biking.”

There’s a similar story behind Eddyline’s Crank Yanker IPA, albeit with twisty history.

It started life — as Eddyline did — in New Mexico, where Mic and Molley Heynekamp opened their first brewery. They had an IPA based on one of their home brews and named it Pick Axe IPA, as a tribute to the nearby New Mexico Institute of Mining and Technology

When they moved Eddyline to Colorado, they realised Pick Axe wasn’t going to work in the adventure state so had a competition to rename the beer.

“We had a ton of mountain biking that started right near the brewery,” Mic Heynekamp explains. “And someone came up with the name Crank Yanker, explaining that the beer was what you had after you ‘yank your cranks all afternoon’.

“It’s apt because the brewery is at the bottom of the valley and every climb starts with a brutal ride up.”

The label comes from an oil painting done by a then rising artist called Jesse Crock.

When they moved Eddyline to Nelson, Crank Yanker came too, and Heynekamp said the name translated well.

“Most people that mountain bike get it. But the funny thing is that we did have some locals going ‘cranky yankee’.”

In something of a bonus for Eddyline, shortly after they opened in Richmond, the Silvan Forest mountain bike park opened in the hills above the brewery.

“A lot of people park at our place, ride up and come back down and have some pints; beer and mountain biking go together great.”

Local Pinner is slang for a fast and experienced racer.

The idea for Local Pinner came from Sprig + Fern designer Hayley Ottman, who hails from the West Coast of America and loves to ride. She designed the label after a ride with friends.

The label captures the adrenaline of Nelson’s world class mountain biking culture and gives a nod to enduro and downhill racers.

“I’m into all outdoor sports — specifically growing up with surfing — but here locally, my brother also used to race downhill mountain biking and is the one who brought the likes of Loose Riders to Nelson, so biking is in my blood,” Ottman explains. “Even if you don’t bike, it’s showcasing that this sport and its culture is bad ass and this is a bad ass beer.”

In the deep south, Wanaka’s b.effect has gone from supplying beer to Bike Glendhu, to making a beer specifically for them, and now partnering in a tree-planting project.

b.effect Founder James Hay is a keen mountain biker and was working with Bike Glendhu, sponsoring events and giving them beer when they needed it. Eventually, the two business came up with the idea of brewing a beer specifically for Bike Glendhu.

The result is Hero Dirt, a sessionable 4.6 per cent American Pale Ale designed to be drunk after a ride.

“Bike Glendhu is about 15 minutes out of town, and the beer was originally made for their café and we wanted people to be able have one or two and still get home OK,” explains b.effect marketing manager Molly Hope.

“About six months ago we started on a sustainability journey, doing a carbon footprint audit to work out where we were and to make steps to reduce emissions.

“We want to use our beers as a force for good and we want the consumers to understand where it’s going and have a relationship with the beer.

“Bike Glendhu had an initiative to plant 30,000 trees by 2025 and we already wanted to plant trees, so we decided on 3 per cent of sales to go back to them.”

Hope said they were asking local stockists to match their donations “to make it a community effort and tell the story that this beer you’re drinking helps plant trees”.