Canned Heat: Why Cans are so hot right now

There’s an unstoppable surge in cans, and there many reasons why brewers, retailers, and drinkers alike are all on board.

A glance at the fridge in your local bottle shop or grocery store reveals a sea of aluminium, and this edition’s episode of number nerdery confirms just what a dramatic shift it has been.

Sometimes a nice bit of analysis reveals a hitherto hidden truth, and sometimes it just confirms what was already pretty clear:  in this case it’s the latter, and I’m not expecting a Pulitzer for showing that there were a lot of hazies in cans released at the end of last year.  The scale of the change over a couple of years is still fascinating though, and there are a few interesting nuances in there around beer style.  Righto, put the kettle on… it’s data time.

Read more: Wedded to cans for better or worse

The first interesting little factoid is just how many more new products have been released each year.  The raw data goes back to 2014, when 288 new products were recorded over the course of the year, with 39% of these being Craft, and 26% being what New World classify as Premium Craft (basically everything except Mac’s, Monteith’s, and Boundary Rd).  That number grows every year, reaching 813 in 2020, of which 94% are Craft, and 92% Premium Craft.  Or, to look at it from another angle, there were close to 10 times more Premium Craft products ranged in New World last year than there were in 2014.

The mix across beer styles has also seen some fairly big shifts.  The biggest and most obvious has been the rise of the hazy.  Around a quarter of new products (24%) in the last three months of 2020 called themselves hazies, up from 7% in 2018, and 2% in 2016 (early pioneers Party and Bullshit and Perris Sky Juice).  The growth of the hazy has pushed up the percentage of beers that are IPAs and Pale Ales (hazy and non-hazy) from 39% in 2016, to 49% in 2020.

Looking at NPD is an imperfect proxy for describing what we’re drinking, or even what’s on the shelves, given that by definition it only tracks what’s new.  But it is a handy snapshot of what brewers are releasing, and what retailers are stocking.  And while clearly confirming the amazing rise of both the can format and the hazy style, it does indicate a slight decrease in diversity of styles. 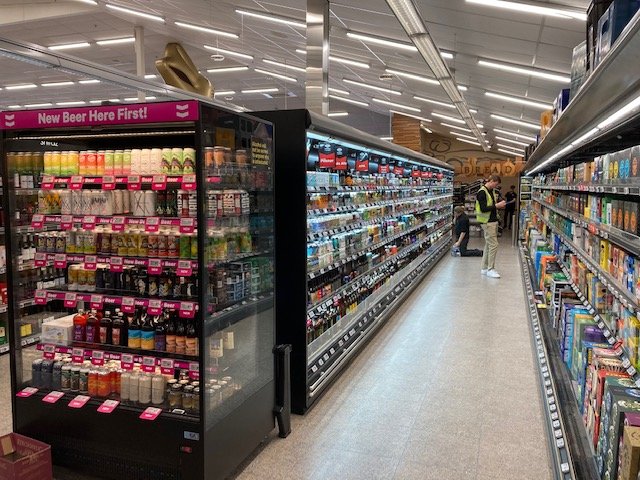 The most interesting part of this analysis for me is the speed with which both cans and hazies have taken a stranglehold on the market.  What will be the big movers in the next few years?  Schwarzbiers in TetraPak?  Answers on a postcard please.

Dave Pearce’s day job is Purple Sneakers, a one-man marketing freelancing business. Before that he worked for Lion for 15 years, and somewhere in the middle lived in a caravan for 6 months with his wife and two small children while circumnavigating the USA. He’s rather fond of beer, but if we’re being honest probably likes music, pies, and various doomed sports teams more.