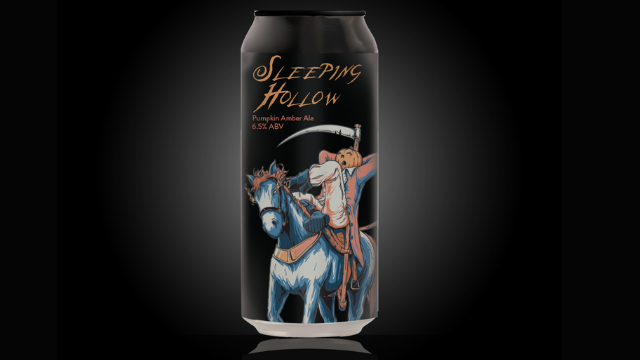 Given the challenges of in-house drinking at alert level 2, much of my November was spent tracking down interesting beers and making overdue visits to some of the capital’s off-licenses.

I missed the launch of Double Vision’s pumpkin amber ale Sleeping Hollow at the brewery in Miramar on Halloween but found it on tap at Malthouse and in a can one lunchtime at Hop Garden. A pukka pumpkin beer with a sweet aroma of caramelly pumpkin, a sweet upfront taste of pumpkin but also a palate cleansing bitterness and some drying hop in a pumpkin-flavoured finish.

The beer pixies dropped off a selection of Funk Estate cans and I enjoyed the big, bitter and tannic finish of Soul Train, a Peach Tea IPA that also had some balancing sweet peach flavours. The Fisticuffs IPA lived up to its name as the big punch of hops in this one livened up my palate. My order also came with a bonus beer from Renaissance – Apollo – a light and quenching hazy IPA with pineapple and lemon notes. Another door-to-door beer (from October) was Moa Into the Wild — a Horopito Red Ale of 6.2%. This had good malt character with a spicy, peppery taste with some roasted malt.

This year was the 25th anniversary of my beer club so we had a celebratory three-course dinner with matching beers at Cinderella Bistro and Bar. This is in the former Bodega building on upper Willis Street (more recently operating as Bresolin restaurant) where the beer club started in the back bar in 1997.

The pre-dinner beer was nostalgia in a glass – Sunshine Brewery’s Gisborne Gold – the beer that was the backbone of Bar Bodega (and of the craft beer scene in Wellington) in the early days. Pleasant and quaffable, the craft lager segment has, however, moved from the days when an all-malt, 3.8 per cent lager with medium bitterness shook the market. The aperitif proper was Choice Bros Blinded by the Light – a pineapple and lime smoothie sour. It was on nitro, so its sourness was mellowed, and there were nice fruit notes and palate cleansing finish.

An appetiser of wood-fired bread, spring crudités and pumpkin seed pistou was served with Choice Bros Helden Pilsner. A real pilsner with a firm malt character, a lemony hop taste with a slight flinty note, this complimented the mix of flavours and cleaned the palate. My main was lovely smoky, wood-fired organic chicken with garlic and fino sherry. This was matched with Choice Bros Separate Ways Pale Ale. This had a light, but firm malt body, an aroma of cat, a slight sweet malt note and a deep hop bitterness and finish that went well with the smokiness of the chicken.

For dessert, the burnt Basque cheesecake and awesome roasted strawberries were matched with either Choice Bros Praise You Feijoa Milkshake IPA or Peckham’s Solstice. So I had both. Praise You was a bitter and spritzy semi-sour beer with aroma of feijoa and a pear flavours. Solstice was satisfying blend of a wild fermented, roasted apple cider aged in barrels and a dry cider made with late season bitter-sweet cider apples. Woody and characterful with a sour note and great drying finish this was good dessert cider. All in all, an awesome night of food, drink, and reminiscing.

I managed a couple of sit-down bevvies one Friday night in town that included a retaste of Psyclone NZIPA from Juicehead at the Rogue and Vagabond. This was big (9.5%) but light bodied with a sweet-astringent taste that cleans out to a bitter and sharp finish. There was some banana in there too. I then pulled into Hashigo Zake for a full-monty Eddyline BBA, an Imperial IPA of 9.8% that was aged in bourbon barrels. Full with the big sweetness of a high alcohol beer, this one was well-balanced with bourbon notes and a drying woody finish.

I went lunchtime beer-hunting at Regional Wines and Spirit at the Basin Reserve a couple of times, which is good way to keep in touch with what’s going in the craft beer market as well a chance to get out the office for a stroll. I was amazed at the relative price of Belgian and US craft beer, so I indulged myself.

Of the Belgians I had Duvel 6.66 a new blond beer from Moorgat that is more accessible that the classic Duvel. It is also more fruity from the addition of orange zest, but with five different hops used and dry hopping its still got a great bitterness. Another Belgian blond was Goulden Carolous Hopsinjoor from Het Anker – yeasty and sherbety with a deep hop flavour and finish this was satisfying drop of 8%.

Dogfishhead 90 Minute Imperial IPA has been called “the best IPA in America” and it’s one I’ve wanted to try for ages. I wasn’t disappointed as it was fruity and hoppy, sweet and full, powerful and satisfying. Its also piney and pungent, so this is one gnarly yankee IPA you want a piece of. Another iconic US craft beer is Dead Guy Ale from Rogue Ales and Spirits in Oregon. Based on a Maibock this has lovely malty aroma of bread, a complex malty flavour with caramel, toffee and nuts, and a medium bitterness to balance it all out. Jai Alai from Cigar City Brewing  in Tampa, Florida is another classic US IPA – 7.5% abv, fruity malt flavours and a great bitterness of taste and finish.

Find of the month though was at Everyday Wine on upper Cuba Street, Wildflower St Florence: an Australian wild ale made with Semillon grapes. Saint Florence is a golden, mixed fermentation, barrel aged beer made with hand-picked Semillon grapes from Tyrrell’s vineyards in NSW. The aroma is reminiscent of Semillon wine with some lemony zest and pear. Light, dry, with a sharp zing and some yeast funk, this one tastes bigger than its 6%. It opens up as it warms to a moreish, savoury finish.

Finally, the November Fresh IPA from Garage Project was another pearler. Looking like OJ, smelling like hops and tasting like bitter fruit juice, this was tasty and fun.

A Crystal Clear Idea of IPA

Shedding its skin: Tuatara gets another rebrand

Scooters, pints and pubs in paradise