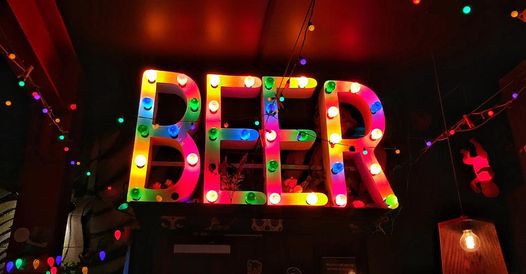 Alert level 2 dinking in Welly this October meant event cancellations continued, while table service created a more European approach to beer drinking. Getting a pint on a Friday night became more of a challenge, with booking tables a new trick to learn. There was, however, still fun to be had. I particularly liked the bordello-like vibe Goldings Free Dive created with curtains between their fixed tables.

Early in the month I was a guest speaker at an Oktoberfest themed beer brunch in the iconic St Peters Hall in Paekakariki just outside Wellington. Despite social distancing there was a good crowd of around 50. Tuatara beers were matched to schnitzel and strudel and there was a soft launch of their mellow and malty Vienna lager. Other beers included a juicy and creamy hazy IPA and the original strength (8.5%) Ardennes Belgian golden ale. A nice way to start a Sunday and in the run up I also got to sample some aged Tuatara bottles. The Dubbel Barrel was all dark fruit and bitterness while the roasted and coffee notes of the Midnight Sun Baltic Porter held up and the finish was still bitter.

The following week we had the beer club at our old stomping ground the Fork and Brewer brewery bar in Bond Street. I started with a favourite — Burton Ernie — a 6.5% Burton ale on nitro. Full and smooth it had a malt sweetness that was balanced out by a zesty dryness. Next up was the exciting NZGA Brut, an unfiltered IPA made with a Sauvignon Blanc yeast and Nelson Sauvin hops. This beer-wine hybrid had an acidic winey aroma, was spritzy and light on the palate, with a fruity, winey and quenching taste. Last but not least, was Zombier — a Triple IPA collab brew with Epic Brewing. You could consider it to be Hop Zombie’s big brother — 12% with a heady aroma and big alcohol flavours in the finish. But it was also light and fresh, despite being as bitter as. Highly drinkable and therefore dangerous.

Other collabs I had during October included one from the Curator Project, a social enterprise that connects an artist, a brewer and a charity. Their Blackberry, Boysenberry and Sage Sour Ale made at Salt and Wood in Waikanae was unique and tasty. Spritzy, sweet and sharp with savoury sage flavours coming through —this is a great food beer. Also made with sage was Juicehead Confusion, the winner of the third annual Lager than Life competition at Hudson on Chews. A Pineapple Sage Pilsner, Confusion had a pineapple sourness and a savoury hop finish. Tangy, light and tasty this beer had quaffability.

After the lockdown break, tasting trays were a good way to see where a brewer’s range is at, and I had a couple on successive Friday nights.

At Heyday brewery and bar in upper Cuba Street I had two ales and two dark beers. The sessionable Brave Noise pale ale was light bodied and big hopped, with a lean malt character. This beer is part of the global Brave Noise beer collaboration that advocates for safe spaces and inclusive environments with the beer industry. The Rainmaker Hazy IPA was bitter, fruity, and 8 per cent. It has become one of their best sellers and the proceeds are being donated to the Wellington Free Ambulance. Their Blackbird Raspberry Porter came off the handpull so had a soft and creamy mouthfeel as well as a raspberry aroma, flavour and finish. There was also dark chocolate in the taste and bitter and roasted notes in the finish. The tasting tray finished with Underwater Forest — a peated kelp stout made with Ecklonia kelp. Well-balanced with a big bitterness and roasted flavours like an Imperial Stout, a little salt was discernible in the finish. It seemed to sing out to be matched with an Islay whisky.

At Garage Project’s Wild Workshop for the following week I had their Classic Selection tasting tray of golden beers. Crispy Club: Serpentes was an unfiltered lager with a good hop bite and finish with some citrus notes. Zitronne Weisse had a yeasty citrus aroma and Weiss beer flavour (banana) and mouthfeel, with lemon in the finish. Arvo XPA was an unfiltered ale made with pale and wheat malt. A bit catty in the aroma, this was light bodied but with quite big hop profile. Last was the Proper Crisp IPA made with potatoes in the mash. A bit lagery in aroma and taste, there was some crisp hop flavours going on, but not much else.

Other Garage Project beers sampled during October included their latest Fresh Hop Hazy IPA that had a noticeably big bitter taste and finish with orangey flavours. Deceptively drinkable at 7 per cent this was one of the better ones I have had this year. I also roared out and bought a bottle of their 10th anniversary Halloween special, Feed the Beast, a vanilla infused Bourbon Aged Stout of 13.8 per cent. Rich and sweet, with a cocoa aroma and coffee beans in the taste, this big beastie had all the trappings of an over-the-top alcoholic monster. But while big, it wasn’t cloying, with raisin and vanilla flavours balancing out a somewhat astringent finish.

Towards the end of the month the annual Felix Wellington Hospitality Awards were announced. The Outstanding Beer Experience Award went to Little Beer Quarter, the Outstanding Bar to the Rogue and Vagabond, and Parrotdog won the Outstanding Regional Establishment for their newish Lyall Bay venue.

On the last day of the month I again found myself at Hudson on Chews, this time to try Panhead’s latest Greasin’ the Wheel release – For Richard. This NZ Steam beer (aka California Common) is a salute to NZ craft beer guru Richard Emerson. Amber with a touch of caramel in the aroma, this light and lagery beer has a good malt character that dries out thanks to the addition of Pacific Jade hops.

Shedding its skin: Tuatara gets another rebrand

Let the right one in

An idyllic dozen of the decade