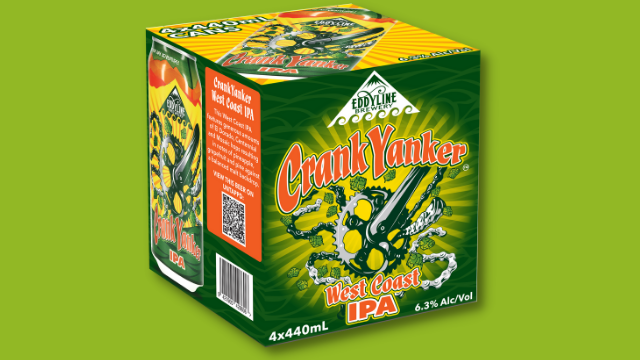 In a world where packaging formats change as rapidly as hop combos in a hazy IPA, Nelson’s Eddyline have come to the market with a potentially game-changing 4x440ml “cube”.

As craft beer moves ever faster away from the one-time benchmark 500ml bottles, we’ve seen huge growth in six-packs, first 330ml bottles and now with 330ml cans – reflecting the quick pivot to aluminium in the past couple of years.

All of these larger formats (six-packs and bigger volume glass) offer a value proposition for consumers but also require a commitment to volume.

As a result, for many breweries, the single 440ml can represents a higher-margin option – and consumers like 440ml singles as a way of exploring new releases and rarities.

Eddyline is set to change all that and the question is: who will follow?

While a number of breweries offer four-packs of 440ml cans from online stores – putting a core range into 4x440ml cube-shaped box and selling them for around $20 … well, this is a first.

Adam Tristram of Eddyline admitted the 4x440s could be seen as “disruptive” but they were more a matter of necessity and reflect the fact Eddyline have a “pedigree” in 440ml cans.

Eddyline owners Mic and Molley Heynekamp have been wedded to 440ml cans since the first Eddyline brewery was set up in Colorado. When their Nelson operation expanded last year they went with six-packs of 440ml cans. While these represented good value at around $30 – they found customers were reluctant to make the jump from the new normal of $20 for a 330ml six-pack.

The dilemma for Eddyline was whether to retool the canning machine to do 330ml cans or reformat the packaging.

Then there was the fact that the old six-packs were secured with high density polyethylene (HDPE) can carriers, which were seen as a barrier to purchase for some buyers.

“While HDPE is fully recyclable in New Zealand there seemed to be a barrier, mindset-wise, around plastic, whereas people understand they can definitely recycle a cardboard box,” Tristram said.

Tristram says the new format has an RRP of $20.99 but expects to see some selling for $1 less.

The main difference for customers weighing up pros and cons is that they will get 1760ml of liquid in a 4x440ml box versus 1980ml in a 6x330ml. There will be calculations made as to value for money versus the benefit of having four larger cans versus six smaller cans.

The boxes, with a small hole in the top lid, are easy to carry and the brewery has used every millimetre of available space to tell their brand story and connect with customers via QR codes.

“It looks fantastic, it’s at a good price point and tells a story,” Tristram says.

The core range beers in the cubes include Crank Yanker IPA, Summer in the Citra Hazy IPA, Sipping on Sunshine Hazy Pale Ale, and Eddylite, a session IPA.

Meanwhile, the brewery is close to opening a new taproom and taqueria at their new brewery location in Stoke.

Best in the west