The current Covid-19 response is forcing beer festivals to be flexible as they pray that the country will return to alert level 1 and events can go ahead.

It will now be held on Friday and Saturday, December 3-4.

Andi Hickey, from Beer Baroness in Christchurch said in a statement: “Great move shifting the dates further out for the  Dunedin Beer Festival.  Although we know it’s a logistical nightmare for a lot of people, and for the public who already have tickets, from a small brewery perspective, who have not been able to brew for the past five weeks, this is a saviour.  It means we have some time to prepare and brew something special,  so we can bring the festival magic that people want.”

The change of dates brings a logistical headache for breweries in the deep south as the second day of the Dunedin festival now clashes with the Wanaka Beer Festival. Many of the smaller breweries in the region will now have to split resources to have a stand at both events.

James Hay, part of the team behind the Wanaka festival, said it was frustrating to have a date clash but understood that December 3-4 were the only dates when the Forsyth Barr Stadium was available for OUSA.

He said all but one of the Wanaka exhibitors had confirmed they’d be attending both festivals.

Eddie Gapper of Altitude Brewing in Queenstown said it was a challenge to set up a stand in two places at once.

“Dunedin Craft Beer & Food Festival moving to the same weekend as Wanaka Beer Fest is a bit of an operational challenge but everyone here has got used to adapting and getting it done. Given the circumstances we’re just stoked we can all hang out and enjoy great beer!”

Meanwhile, a new festival scheduled for Victoria Park in Auckland in November has been pushed back to March 2022.

Beers in the Park is now being held on March 5.

However The Beer Festival, presented by The Beer Spot, is going ahead at The Cloud on   Friday and Saturday, November 26 and 27.

The sessions are Friday 3pm-8pm, Saturday 12pm-4pm and 5pm – 9pm. So far there are 35 breweries and 11 food trucks committed to the event. For more information, check out thebeerfestival.co.nz

For those who had already bought tickets for the Dunedin festival, they will automatically be transferred to the new dates but refunds are available through Ticketmaster for those who are no longer able to attend due to the change in dates. Refunds will close at 5pm Sunday,  October 31.

For those who missed out initially, join the waitlist for potential tickets here.

For those travelling from out of town, Air New Zealand will also credit flights for transfer to the new dates. 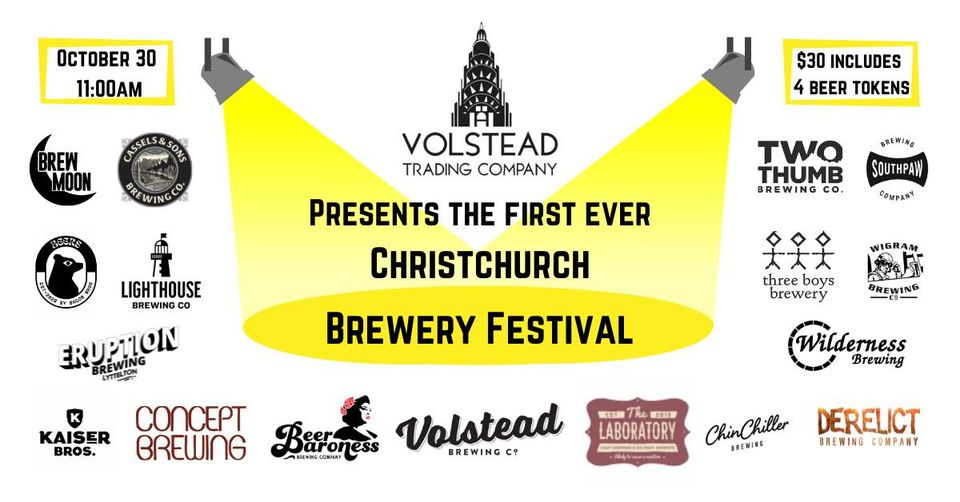 In Christchurch, the first “Brewery Festival” hosted by Volstead was supposed to be held on August 28 but had to be cancelled because of lockdown.

The’ve rescheduled to October 30, one of the dates abandoned by the Dunedin Festival.

The festival has been touted as an unprecedented gathering of all 15 independent craft breweries in the wider city.

Meanwhile, it’s been confirmed that the Hamilton edition of the Great Kiwi Beer Festival is back on the city’s schedule for 2023.

Organisers pulled the plug on the 2022 festival, citing licensing conditions that were too strict.

In June, festival director Callam Mitchell said the extra conditions imposed by licensing authorities meant they could not deliver the 2022 festival without seriously diluting it, having an impact on the customer experience and trade.

While the festival is back, albeit a year late, Mitchell declined to tell Stuff whether those impasses had been resolved to his satisfaction.

“I don’t really want to rehash the bones of contention again as we’ve made very positive progress with both police and the DHB so far, and are on track to deliver the festival in the same format in 2023. We don’t have a definite date as yet, but we’ll be aiming for mid-March again, and dates will be announced early in the new year.”

Police opposition to the festival, backed by the Waikato District Health Board, was focused on high-strength cocktails being served and incidents of intoxication.

They also said because Good George and Fortune Flavours were playing loud music at their tents, it changed the nature of the event from a beer festival to a concert.