A pair of skateboarders trumped magical animals and Satan to give Queenstown’s Searchlight Brewing top prize in the annual GABS Label Design Awards.

The winning entry was designed by Mikaela Merrilees, of Meraki Design Studio.

The Searchlight entry, Ladies of Dogtown, broke new ground in can art design as the main image was a photograph rather than a graphic design.

The name of the hazy pale ale riffs off the classic 1970s skater movie Lords of Dogtown but with the name changed to Ladies as the brewery wanted to not only highlight the talent and passion of the Queenstown skate culture but also empower women to breakdown gender-boundaries and take up the very male-dominated sport.

Heyday in Wellington were runners-up for the second year in a row with their Magic Portal IPA while Small Gods x Maltkult couldn’t quite replicate their Packaging Trophy win at the recent Brewers Guild of New Zealand Awards.

Searchlight founder Lewis Gaskin grew up skateboarding and snowboarding and when he moved on to brewing he wanted to create a place for like-minded people to get together and enjoy some great beer.

“The brewery has become much more than that now,” Searchlight said in their entry. “It attracts artists, musicians, everyday locals of Queenstown, and good vibes. The very two skateboarders on the label frequent the bar and are part of the community Searchlight Brewery embraces and loves. With a big female following, and the brewery employing mostly females, the designer thought there would be no better way to tip their hat to the girls than shooting these photos with a local photographer on international women’s day.”

Searchlight’s entry was judged the best out of 55, which were whittled down to a shortlist of 10 through a public voting process.

The top-10 were then rejudged by a panel including Emma Webb of Opal Specialty Packaging NZ, former Lion brand expert Dave Pearce of Purple Sneakers, Andrew Morwood of Orora Group, Michael Donaldson (editor of Pursuit of Hoppiness), Sabrina Kunz, the former executive director of the Brewers Guild of NZ and Ahmad Salim from Deloitte Digital Creative. 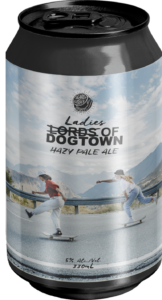 “Cool label. The imagery is perfect. The skaters are captured with just the right amount of insouciance that suggests free, relaxed, easy-going … just the vibe you want when having a beer.”

“Really interesting visual approach – photographic treatments are surprisingly underused on beer artwork, so this in itself really stands out. The full image is a lovely piece of photography.”

“In a world where designs are artwork – we rarely see photos. This immediately makes the can stand out against others. It definitely gives off ‘good vibes’ while giving the consumer all the information they need front and centre. An absolute success story in bringing a brand’s values to life.”

“Great job and love that they’ve baked an idea and values into this beer rather than just focus on what’s in the can. It’s to be rewarded.”

“There’s a magical quality to this that says you’re going to go on a journey and you might not know where it ends, which is a great thing for a beer to do.”

“I love this one! It’s fun, it’s a standout, it’s on brand, and I know what I’m buying into with the liquid as well as with the brand.”

“IMPACT! This is a wow-factor piece of art in the true sense of it. This is beer as art and culture and story-telling. Amazing.”

“Wax addition to the can is a brilliant touch. Design is extremely striking and distinctive.”

“A class act. Really great illustration with beautiful detail, and quite a departure from the standard Whistling Sisters look in core range and limiteds.”

“The clever use of the aluminum coming through the design definitely makes it stand out on a retail shelf. It certainly makes me want to try a beer I’ve never had before and that is what great design is all about.”

“Really nice illustration, and the whimsical and imaginative scene developed is a great bit of creative collaboration between brewery and artist. Heaps of shelf appeal.”

“Fun, bright, alive and colourful. It’s an arresting label and the juxtaposition of a chainsaw massacre against a sleepy seaside town works quite nicely.”

“Creative and brave to link raspberries with Chainsaw Massacre! Graphics are super effective to grab attention.”

“Great label. Visually stunning, eye-catching, on-trend and vibrant with a hint of mysterious science fiction about it with the protective gear and gun making it look like a dangerous space mission.”

“Very timely and cool to acknowledge what our Healthcare workers are up against in these crazy times. They will definitely appreciate the recognition and no doubt a well deserved beverage!”

“Really like the connection back to a great summer chillout song that I’m sure a number of consumers would connect too.”

“Literally does what it says, and shows what it does. The anthropomorphised lime rowing a coconut boat is playful and clever and tells you what the beer is all about.“

“For those that know Duncan’s, the design says it all. Fans will know where the beer comes from instantly. Within that, there’s a lovely lava lamp-like quality to the flow of colours and shapes that signals the gooey marshmallow. And as such it can appeal to the non-fans as well. Excellent.”

“I love the illustration and the colours: like a lowbrow lava lamp!.. Highly distinctive within the category, and both clearly part of the Duncan’s family but plenty of standout within the range.”

“I thought this was super distinctive. It screams rice lager, Japanese cues, but retains the ID and quirkiness of the brand as well as finding a nice connection between the Southern Alps visual of the brand and Mount Fuji. I like it a lot.“

“Really nice design. The concept is well thought through and executed with lots of lovely touches.. The textured label and the use of distinctively traditional Japanese artistic styles makes this really stand out.“

The Miracle of Southland’s Holy Hops