Small Gods: From Satan to Santa

Beer Jerk has been connecting craft enthusiasts with rare and interesting styles for years. The men behind the online operation have also been making their own, collaborating with other breweries and, more recently, going it alone. But Small Gods is hardly Beer Jerk’s homebrand. As co-founder Luke White tells Britt Mann, it’s a labour of love.

YOU COULD blame the gin and tonics for what happened next.

Auckland’s K Rd, 4am, and a slightly unsteady Luke White, co-founder and director of Beer Jerk as well as Small Gods brewing, was introduced to a beautiful, Amazonian woman in enormous heels.

The basement bar had no decent beer, hence the G&Ts, but Elektra Shock, a star of Ru Paul’s Drag Race Down Under, transpired to be a fellow beer lover. Her alter-ego James Luck phoned White on Monday morning about the prospect of brewing a beer together. About a month later, Forbidden Fruit, a banana milkshake Hefeweizen, was born.

The launch party at Fridge & Flagon, Beer Jerk’s warehouse bar, featured a drag show, a DJ, dancers dressed as bananas, and, White recalls, punters smooching in the hallways: “the sexiest, most fun party that’s ever happened for a craft beer launch”.

Within a week or two, Aotearoa entered level 4 lockdown — again.

Forbidden Fruit never made it to the taps at G.A.Y bar or Elektra’s other haunts, for which it was destined. But it remains a shining example of what a craft beer collaboration can be. 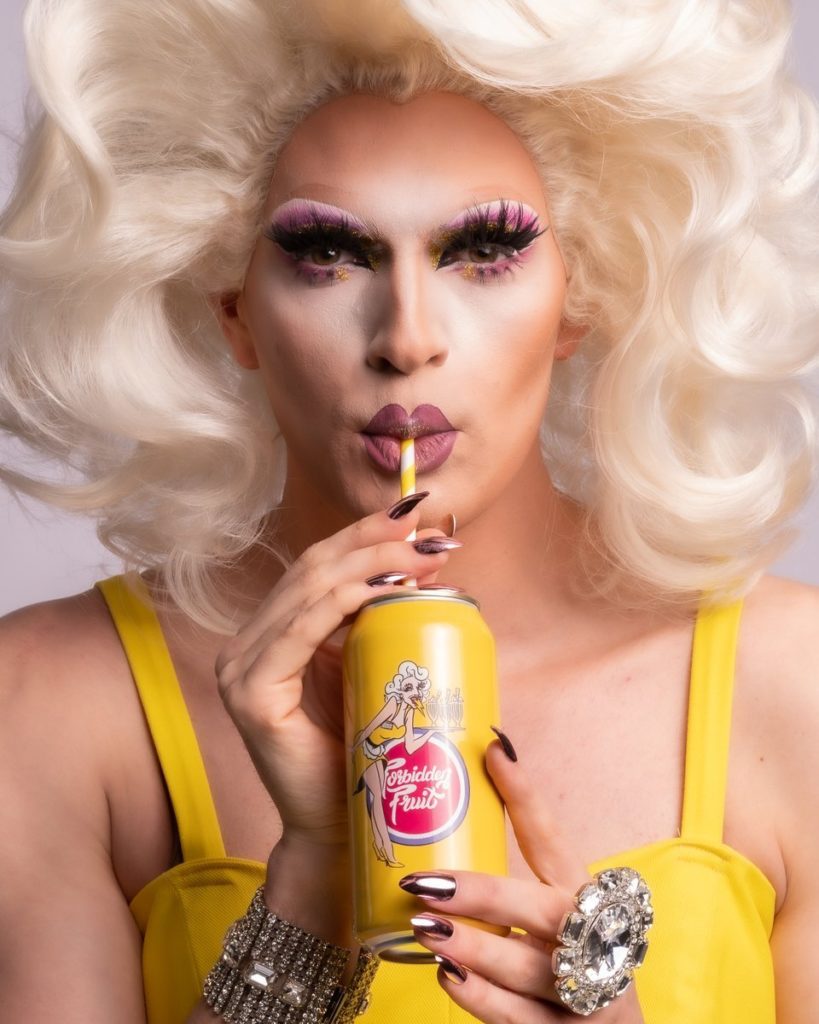 Luck wasn’t involved in the recipe development — that’s the wheelhouse of White and co-brewer (as well as Beer Jerk general manager) Matt Eats. But it was, White says, a real creative partnership. The banana theme is a wink to a double entendre that doesn’t need spelling out, while the can design features Elektra in a dress she made for the occasion.

It also comes garnished with a custom paper straw whose addition came from a conversation she and White had about why, as she put it, “queers don’t drink beer”.

Apparently, the beverage’s bloating potential is unbecoming for a community partial to dancing the night away. And drinking from a glass risks messing up an artfully applied lip. Ever-entrepreneurial, White had the solution: “I was like, ‘Fuck it, you can drink beer through a straw’.”

Forbidden Fruit preceded the six beers Small Gods released during lockdown, and is one of 18 bearing the nanobrewery’s moniker inspired by Terry Pratchett’s thirteenth Discworld novel of the same name.

Contract brewing allowed Small Gods to expand its range beyond collaborations with brewers, though lord knows plenty have arisen from the latter. Working with brewers who excel at a particular style, producing one-off, small batches, Small Gods’ process is not about efficiency, rather doing what must be done to achieve requisite flavour.

“What we inject is just pure froth and passion,” White says. “For any brewer that might be feeling a bit jaded or a little bit like, they just need to make beer for the masses, make another hazy pale ale. Matt and I turn up with our excitement, that novelty. And that’s kind of contagious.” 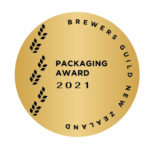 A case in point: Black Narcissus, brewed with Double Vision, is a modern attempt at a Mumme — a bitter, viscous style that hadn’t been brewed for half a century. White came across it in a beer history book, interpreted a few recipes, and ordered a kilo of blessed thistle (usually the preserve of lactating mothers) to bring the bitterness that marries with spice from cardamom pods. With Double Vision head brewer Mario Lanz a dab hand at imperial stouts, they produced a beer that remains among Double Vision’s highest rated on Untappd.

White knows a 12.5 per cent beer “you need a knife and fork to get through” is not to everyone’s tastes. And he does not care. “It’s what Matt and I want to drink,” he says.

“There’s enough people that are like us that we can move a batch of beer of something that’s really extraordinarily strange.” 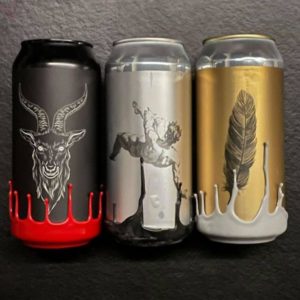 Having brought a beer back from the dead, another triumph has been the Satan Trilogy, a collaboration with Maltkult, aka brewing consultant Mike Cheer, and the first Small Gods’ offering produced by a contract facility in Whenuapai. Comprising the kinds of obscure, history-steeped styles Small Gods favours — a gunpowder bock, a fig dubbel and a whisky fortified Scotch ale — the triptych won the Packaging category at this year’s Brewers Guild Awards. The design represents Lucifer’s journey from angel, through betrayal, to fall and fiery fate. Over countless hours, White and Eats hand-dipped each of the collection’s cans in wax melted in a slow-cooker while recording episodes of the Beer Jerk podcast.

For Christmas, Small Gods have collaborated remotely with Moon Dog and Molly Rose, both based across the ditch in Victoria, for another holy trinity  — this time with a few letters swapped. Santa Santa Santa is a chocolate coconut snowball stout, and there’s a Christmas pudding barleywine and a Jamaican black cake-inspired imperial stout, the latter two of which happen to be vegan. The collection can be bought with or without a custom glass. 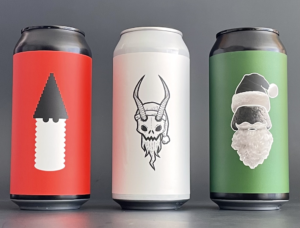 Now 38, White emigrated from the UK 12 years ago, having trained in photography after leaving the military — he fixed helicopters in Northern Ireland. Ultimately, the advertising world wasn’t for him.

“I think I just hate anything fake,” White says.

Those values are reflected in Beer Jerk’s range. What began as New Zealand’s first craft beer subscription service in 2015 now also offers hundreds of beers from only independent breweries, available online or from the no-frills 12-tap Fridge & Flagon in Auckland’s Eden Terrace, which harbours the city’s biggest craft beer range.

Notwithstanding that night on K Rd, White rarely overindulges.  “I’ve always been interested in flavour,” he says. “For me, drinking is not just about getting pissed. Sometimes it’s fun to get pissed but if you can do it in a delicious way, then why the hell not?”

A Mixed Six with Mike Neilson of Panhead

In the latest edition of our Mixed Six we speak to Mike Neilson, founder of Panhead Custom Ales Favourite beer in your core range? It would have to be our Port Road Pilsner. I feel like it’s a beer that brewers drink: light, clean and refreshing, with enough hops to...
Read More

Waiheke Island’s Alibi Brewing, crowned Champion Exhibitor at the 2021 Brewers Guild of New Zealand Awards, is ready for a break-out year after getting a canning machine in place just days after their award.

Ground Up going up and up

"Punks in the Gym" may bring to mind images of gym rats lifting dumbbells and doing squats. But this IPA by Ground Up Brewing in Wanaka, New Zealand, is actually named for a famously challenging sport climbing route in Australia. “It was the world’s hardest climb in...
Read More

Tim Newman carries out a post-mortem on the trophy winners from the Brewers Guild of New Zealand Awards.

When Rhyme x Reason rolled up its big doors for the first time on an industrial street in Wānaka in June 2017, it was the first brew pub in town. Now, it might be one of a few — but it remains one of a kind. The brainchild of head brewer Jess Wolfgang and her partner...
Read More

Britt Mann has been a journalist for most of a decade; her better ideas have arisen over a pint or two. She's interested in the endless possibilities inherent in the business and practice of brewing, and loves a good origin story.

A decade of decadence

Bread to Brew: the rise and rise of Derelict Brewing