The future of New Zealand’s brewing scene looks as bright as the sunrise on a summer morning in Gisborne judging by the results achieved by Arna Wilson recently.

Wilson, 26 this month, is a trainee brewer at Sunshine Brewing and recorded one of the best results in the International Brewing and Distilling General Certificate test this year, passing with distinction.

In a statement to Pursuit of Hoppiness, the IBD acknowledged the outstanding result saying only 98 out of 7000 candidates had scored a distinction in the past 10 years, which puts Wilson in the top 1.5 per cent.

“We would like to congratulate Arna Wilson, Trainee Brewer at Sunshine Brewery, in Gisborne, New Zealand, for achieving a Distinction in the IBD General Certificate, the highest grade for an exam result scoring over 90%,” the IBD said. “Arna’s accomplishment proves the commitment and passion of the new generations joining the industry and the importance of education in the sector. For the past 10 years the number of candidates with a Distinction is only 98 out of 7000 candidates, so Arna’s grade says it all. Congratulations both to Arna for her achievement and the Sunshine Brewery for their support.”

Wilson came to brewing from a background in hospitality but attributes her love of beer to frequent visits to Nelson’s The Free House with her mother. Too young to drink, she would hang out with other kids longing for the day she could have her first pint.

She started working in hospitality at 13 but it was when she took a job at Garage Project in Wellington that beer came to the fore.

“When I moved to Wellington I got a job at Garage Project taproom and that cemented it. I felt I was a bit over hospitality at that stage but when I got to Garage Project it was a whole different scene.”

All the same, Wilson “never took myself seriously to be a brewer” until the world got turned upside down.

Wilson was working at a lodge in the ski resort town of Hakuba, in Nagano, Japan, when Covid-19 started its spread.

“I got a call from mum who said ‘take this seriously’ and I think I came back on the day of lockdown. It was good timing.”

Back home in Nelson she learned about the Otago Brew School in Cromwell and was set to attend this year.

Before heading south, she decided to join some friends fruit-picking in Gisborne over the 2020-21 summer.

“Anywhere new that I go, I track down local brewery so I went to Sunshine Brewing for a beer one day and thought, ‘damn, I should work here instead’.”

Work in the bar led to a role in the brew team. “I’d wanted that badly for some time so that worked out perfectly.” 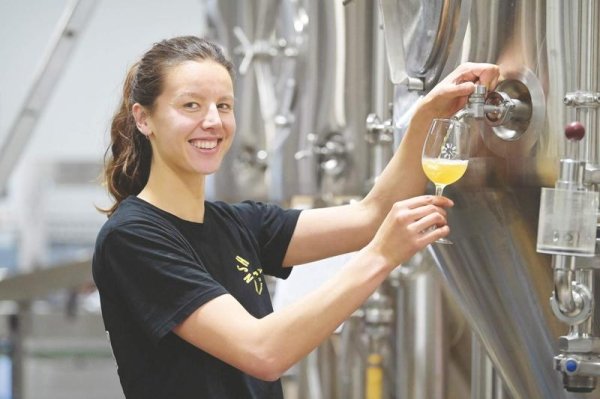 Her secret to doing so well in the IBD exam is lots of hard work, and supportive friends and workmates – including her former GP colleague Charlotte Feehan, now the head brewer at Abandoned.

“I had a lot of advice from Charlotte from Abandoned. She was a good mentor at the start to give me the confidence.

“And I was really lucky to have Jesse Foley, our head brewer, who would answer all my annoying questions. He’s patient and willing to share. He’s really keen to help me get to where I want to be.”

She said the hardest thing was staying on track with the study material.

“Because I was new to the brewery, I wanted to go off on a tangent with everything. I’d go down big rabbit holes on one area and just start researching that. It was a matter of staying on track and sticking to the overview they give you.

“At the brewery I was learning what to press and when, and the study was good at helping me understanding what was happening and why it was happening.”

Even with the certificate under her belt, Wilson knows there’s lots more knowledge to accumulate.

“I feel like the more I start to learn, the more I know nothing. There’s so much to learn and I’m only scraping the surface – but I love being part of the whole process.”

The next step is to start designing her own recipes, which she’s doing with Foley’s help on a pilot kit.

After that, the dream is to have her own place.

“I see myself having having my own space or brewery – I’m playing with ideas and the more brewers I meet the more I realise everyone does it differently and has their own thing and I’m just trying to find my thing at the moment.

“You can feel it when you go into certain breweries – that it’s someone’s and it’s a part of them and you can feel it.”

Foley is certain his under-study is a star in the making.

“Having a green trainee is difficult for any manager but she has taken really well to guidance. She is a quick learner and we’re really lucky to have her. She knows she’s been given an opportunity and she wants to utilise that.

“Her work ethic is over the top. I have full confidence she will be one of New Zealand’s top brewers.”

What came first? The Hipster or the beer

Elephant in the brewhouse