The Miracle of Southland’s Holy Hops

Tom Jones calls them “holy hops” because they’re watered by rain that’s captured from a church roof, but others might well call them a wee miracle.

Jones believes he has the world’s southernmost commercial hop garden at Tuapeka — a small town in Southland that forms a geographic triangle with Balclutha and Gore.

The thing is, he’s only just the southernmost hop farm, slight south-east of the McNamee family farm in Garston, which delivered a load of fresh hops to Queenstown’s Altitude Brewing this season.

Jones grows English heritage hops Kent Golding and Fuggle as well as a relatively new variety called Tangerine Dream. He’s also got a breed he’s called Black Horse because it was taken from stock that grew at the old Black Horse pub in Lawrence.

Jones is a former brewer who learned his craft at Emerson’s before starting Green Man and, most recently, Herne Brewing. He’s not brewing now — his days are spent operating the distinctive Tuapeka Mouth Ferry, growing hops and working on the St Augustine Church that he and partner Vicki-Maree Yarker bought a few years ago.  Yarker also had her own brewery brand, Beltane. 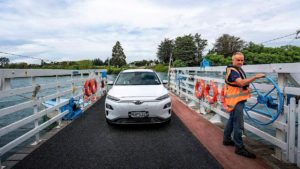 Jones said his main customers this year are the Invercargill home brew shop, 4 Mates, which sold fresh hops to lucky home brewers in the deep south, while Dave Gaughan from Eagle Brewing took 50kg of Fuggle for a brew he and Jones did together. The previous year, Jones did a collaboration with Catlins Brewery, making a 250-litre fresh hop batch called Hāpi Tāne.

Jones, while a novice hop farmer, sees a future in the deep south. While it might not get as warm as Nelson, the home of hops, he says there’s enough sunshine hours to make it work.

“They are far easier to grow than kill — they are very tenacious,” he said of plant once deemed a weed. “We have such long sunny days down here it’s a great place to grow hops.”

Jones says the St Augustine Heritage Hop Garden is totally off-grid, with no power or piped water supply. “All of our water comes either direct from the heavens or off the church roof — so we’ve got holy hops.” 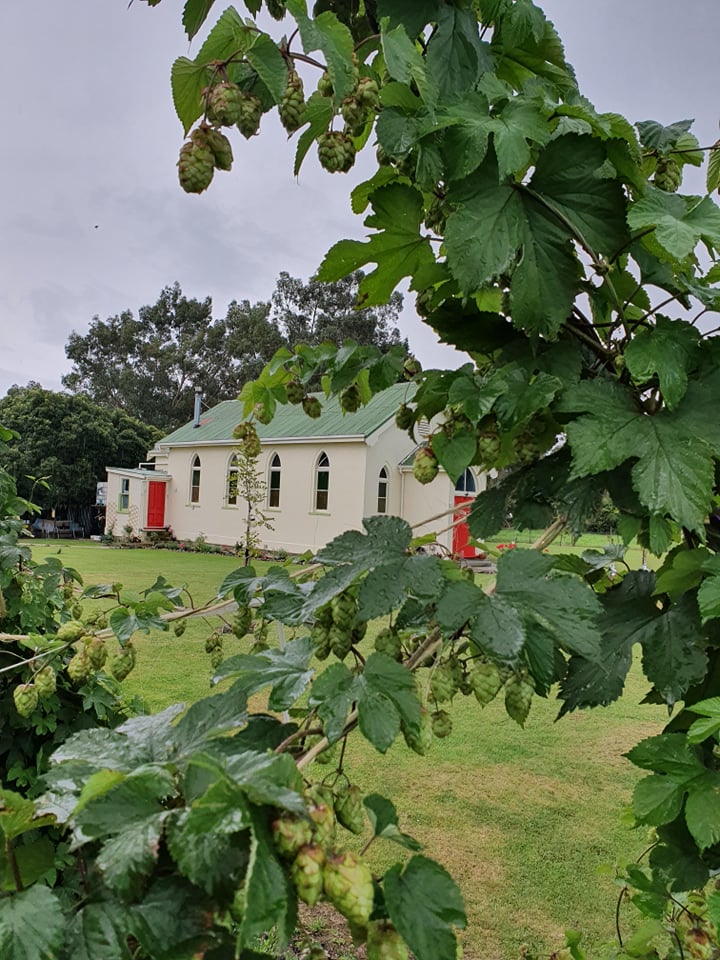 Jones also notes that St Augustine is the patron saint of brewers.

Not far from Tuapeka, James McNamee and Lizette Oberholster decided to diversify  their sheep farm four years ago and a conversation over a beer raised the idea of hops.

“The farm has been in the McNamee family for 140 years, we’re fourth generation and hopefully our boys will be fifth generation,” says Lizette. “Sheep farming doesn’t make a lot of money and we’re just a little bit too high up for dairy.”

The family did some research and found there were plenty of hop growing regions at the same 46 degrees latitude as Garston, including the Yakima Valley and part of Europe.

They took a gamble and sourced some stock from a nursery in Christchurch in 2016 and put in 50 plants. They now have around 800.

Last year was supposed to be the start of a decent harvest, which they hoped to do with Wwoofers (Willing Workers On Organic Farms) but Covid-19 shut that down and the extended McNamee family tried to hand-pick all the hops themselves but lost around half the crop because they couldn’t pick them fast enough. 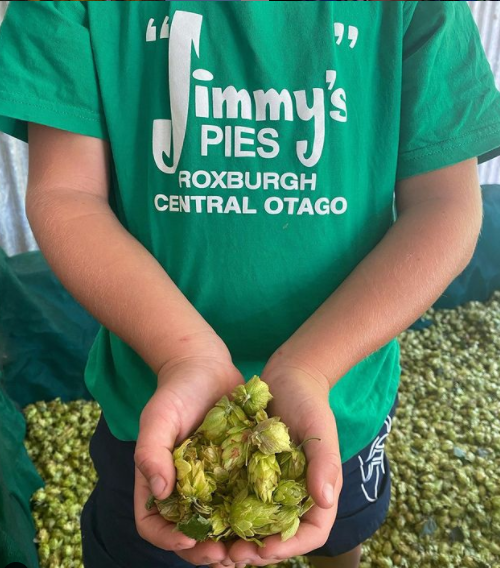 Harvest time at Garston is a family affair. Photo: @garstonhops

Through Freestyle Farms they were put in touch with Levi Collier, from Collier Industries in Nelson, who built them a hop harvester.

Garton’s biggest client is Altitude which took 60kg of fresh hops and will also take some processed hops from Garston who dry the hops in their own kiln before sending them to Freestyle for processing.

“Altitude has been working with us since the beginning,” says Lizette, adding that Altitude brewer Eliott Menzies told them the Southland grown hops have a distinctive aroma and flavour.

“Eliott says they smell different compared with Nelson hops — like the way grapes have different flavours in different regions.”

Garston hoped this year’s harvest was the start of something big for them as they look to sell more of their hops in the future.

“They growing very successfully — we have no trouble growing them. We have no pests here because of the frosts in winter and we that have half-hour to an hour more daylight during summer which they seem to love.”

For the first time the New World Beer & Cider Awards has named a Supreme Champion: and it’s a classic

Tasting notes for the winners in the Top-30, plus judges comments from the 2022 New World Beer & Cider Awards.

Light beers that punch above their weight

What are the best tasting beers under 2.5 per cent? The Pursuit of Hoppiness team put light beers to the taste test.

Diary of a Hop Farmer

In the first of a new series, hop farmer Josh Lewis takes us through the life cycle on a hop farm, starting with the aftermath of the harvest.

Did you know Baltic Porter is actually a lager not an ale. And that it was born of Napoleon’s British blockade?

Gift Horse: a new way to say thanks