There are many ways to encourage Kiwis to embrace science and get vaccinated — but perhaps none quite as delicious and refreshing as these. Vera Alves reports

In the “before times”, a beer label wasn’t a place where you’d expect to find a public health statement. But these are not those times and, in a pandemic, anything that gets people to roll up their sleeves — in this case, literally — and do their bit is worth a shot (I promise this is my only vaccine pun).

Many breweries in New Zealand also operate as pubs and they have all felt the hardship that has echoed across the hospitality industry through the last 18 months, with successive lockdowns keeping pub doors shut.

“We just want to get back to the pub with our mates,” says Daniel McGregor, Head of Community at Good George Brewing. It’s a feeling that will be familiar to much of the country’s population, as New Zealand stands at different alert levels with many hospitality businesses still unable to operate. 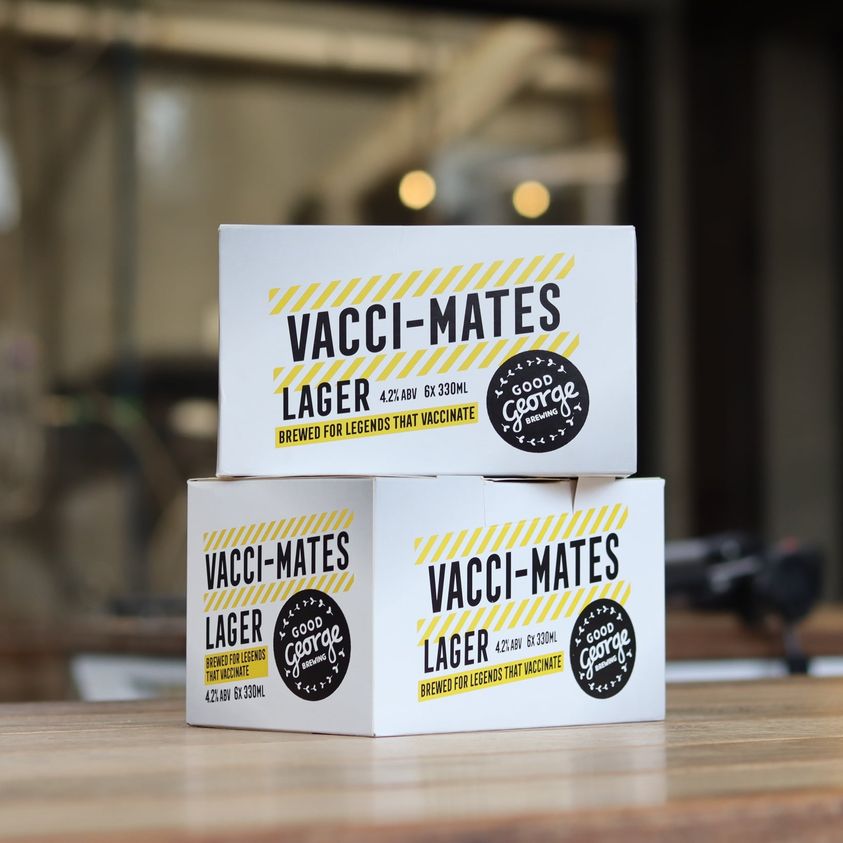 Vacci-mates is a limited edition lager for “legends that vaccinate”. It’s been for sale since October (and there is still some stock around online). The goal, McGregor says, was to “start a conversation”. And start a conversation it did. Good George’s social media had plenty of comments with people who stated they’d never buy their beer again (whether they bought it before or not is not something we can confirm). Overall, he says, feedback was “overwhelmingly positive”.

The brewery wanted to help facilitate the dialogue with people who might still be on the fence about getting the vaccine. But it was about more than that. “We wanted to show our support for the hospitality industry as well,” he says. “We have bars in the Waikato and Auckland and we’ve just been able to re-open in the Waikato but still can’t open in Auckland.”

With high vaccine uptake being the only clear path for hospitality businesses to open, brewing a beer that encourages vaccination was a no brainer. “We’re brewers, not vaccine experts. But we’ve listened to the experts and the evidence is clear,” McGregor said. “This is something we feel passionate about. If people don’t agree, that’s fine. But we don’t shy away from how we feel about it.”

Another person who’ll tell you how hard the hospitality industry is doing is Behemoth Brewing’s Andrew Childs, whose new pub, in Titirangi, West Auckland, opened just a few weeks before the city was plunged into another lockdown back in August.

Not one for half measures, and frustrated by the toll the lockdowns have been taking on people, Childs decided to release a whole dozen conspiracy theory-themed beers.

“It’s been pretty frustrating,” Childs says. “It’s a challenging time for everybody and I just got frustrated with anti-vaxxers, people spreading things that are not real, spreading stupid things,” he adds. 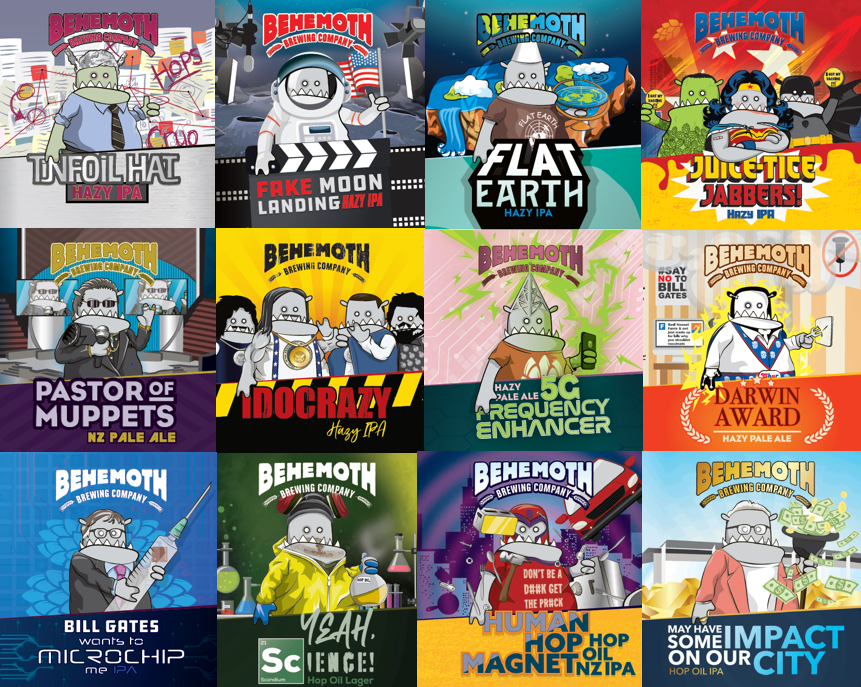 The result was a collection of 12 beers titled “One … big … damn conspiracy”, with references to Bill Gates, 5G, flat earthers and even Destiny’s Church’s Brian Tamaki, with its popular “Pastor of Muppets” beer.

Childs describes the beer series as “an ode to anti-stupidity”. The collection had the fringe benefit of keeping some of the Behemoth staff engaged through lockdown. “About a dozen out of our 45 staff have been involved in getting these beers out,” he says, adding that everyone in the team is fully vaccinated and “gagging to be able to open [bar doors] again”.

“I am pro-mandate. Vaccine passports are necessary. I’d rather there was no mandate but that’s not reality. We live in the reality we live in,” he says.

He says the long lockdown in Auckland has been “soul destroying” but the team is staying upbeat and looking forward to serving beers again. On Super Saturday, when the country broke its daily vaccination rate, Behemoth did their bit by offering free gifts to anyone picking up beer and showing their vaccination card.

“I know anti vaxxers are solidly in their camp and I’m not foolish enough to think I’ll change their minds but if someone is on the fence and we can get them across the line, then it’s worth it trying.”

The brewery has recently released its Vaxxinator hazy IPA, as the country continues its push for the 90 per cent vaccination target.

“As a business, we don’t usually get into political debates. We know this is a bit risky, you might say, but it’s something we feel very strongly about,” Cooper says. He suspects his feelings have been exacerbated by the fact that he has been in lockdown in Auckland for months now. “We’re in week 14 or whatever it is of a lockdown and that is tough going, from both a business and a personal point of view,” he says. “I have primary school kids who have really struggled.”

Vaxxinator is a beer that spreads the message of doing things “for the greater good”.

“I’m an advocate of freedom of choice but this is a choice of freedom. This is for everyone,” he says.

The vaccine-themed hazy IPA has been well received by customers, with “mostly positive feedback”. “You get the usual vitriol that comes thick and fast but that’s their opinion. I go with the science and the health and safety of our nation,” Cooper says.

Vaxxinator is out across the country in 440ml cans and in a mixed dozen pack of Bach beers on Beer Hug.

For the annual West Coast IPA Challenge at Malthouse, Deep Creek decided to expand a little on the “outer space” theme.

After finding the artwork they used for the label, from an artist in Thailand, they decided there was something about it that was more than just the alien-esque beer label they were looking for.

That’s when it struck them: the spaceman-like character on the design looked like he was fighting something. A deadly virus perhaps? And so Antivirus IPA was born, perfectly timed to pay its tribute to the healthcare workers fighting the good fight to keep New Zealand safe. 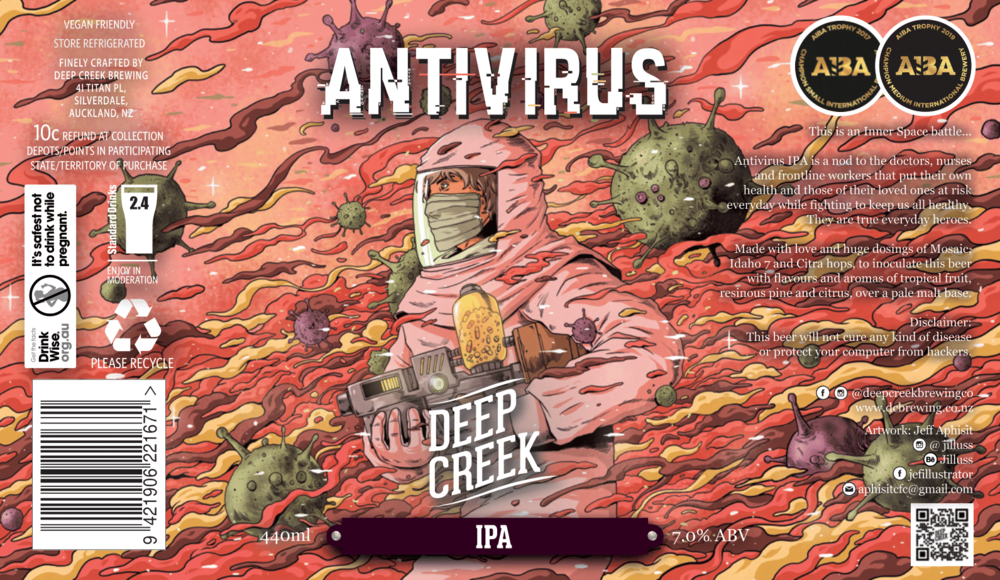 “It was topical and it felt like good timing,” says Deep Creek’s Paul Brown.

Beer sales for the West Coast IPA, brewed with Mosaic, Idaho 7 and Citra hops, are going great — which is good news for Auckland healthcare workers too, as the brewery is donating 50 cents from every can and $25 from every keg sold in New Zealand to the Auckland Health Foundation.

Antivirus IPA will be around all through summer — and hopefully, sometime soon, Aucklanders will get to drink it at the pub with their mates.

In the meantime, we’re just two shots away from all getting our pints at the pub again.

Vera Alves is a Portuguese writer living in Wānaka. She discovered she quite liked beer back in her uni days drinking cheap Sagres "imperiais" under the Lisbon sun but then moved to New Zealand, got a job and started drinking better beer (although she is, to this day, partial to a Sagres). Most of her Covid app check-ins are at breweries and she will not apologise for it.