WAIHEKE  ISLAND is synonymous with wine but hidden amongst the vineyards is a cult brewery having a breakout year. 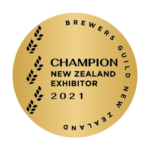 Alibi Brewing, blasted onto wider awareness by winning the Champion Exhibitor crown at the Brewers Guild Awards, is located within Tantalus Estate on Waiheke Island. The brewery and its speakeasy-style Brewers Lounge are located underneath the winery’s restaurant.

Since it was set-up five years ago, Alibi has flown under the radar because most of what they produce was sold to tourists on the island, with the odd keg making its way to the city across the water and occasional forays into cans.

That’s all changed thanks to the confluence of factors. The brewery installed its own canning line in November after waiting 18 months thanks to Covid-19 shipping delays.

The delay, however, proved to have a silver lining: the canning machine was installed and running within days of Alibi winning the champion exhibitor and champion dark lager trophies.

“It’s fantastic timing,” says brewer Bernard Neate. “Picking up the awards a month out from canning is a gift really.”

The champion exhibitor title is decided by a points system based on the gold, silver and bronze medals which are divided by the number of entries.

Alibi entered just four beers in the competition but won medals for three, one of each colour, and their gold-medal Bohemian dark lager was best in class.

“Five awards from four beers is pretty good,” Neate adds with a laugh.

Naturally his phone has been running hot as outlets try to get their hands on Alibi’s beer. Fortunately, he’s ready the wider world now.

“We were in a lucky position prior to Covid as Waiheke’s a tourist destination and many people aren’t aware of Alibi because a lot of volume was sold to foreigners. They came off the cruise ships, off the planes and sat on Waiheke and drank the beer.

“Very few kegs needed to get off the island and the downside was we didn’t need to build a brand as such. With Covid we lost all our customers and the bars were shut.

“But we’re now officially owners of a three-head canning line. I spent a week with the guys from Viniquip, commissioning the machine and upskilling and now we’ve got beer in cans and we can get the brand recognised.”

The first three beers packaged are a Bohemian pilsner, a milk stout, made with vanilla, coconut and cacao, and a hazy IPA called Scud City. The trophy winning beer, a Bohemian dark lager, is not in cans as it was designed as a winter beer for on-premise.

“I’d put a lot of time and effort into the Bohemian style pilsner we serve at Alibi. But I wanted a lower alcohol but full-bodied option for winter, but not an ale, I wanted to brew a lager.

Neate describes the beer as “slightly toasted, seeded brown bread, with a little bit of espresso without being bitter and too coffee-like, a little barbecue char and some cacao on that nice soft clean lager. It was keg only and it flew out the door.”

Neate, who commutes from Auckland via scooter, ferry and scooter, was on his long journey home from Waiheke on the night of the awards and was watching the awards on his phone when he got the news he’d won champion exhibitor.

Neate’s commute takes about 90 minutes each way — half of that on the ferry. 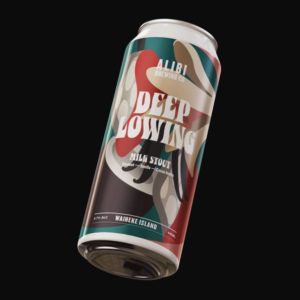 “People ask ‘how the hell do you do it?’ but the job is that good. It is a long time, but it beats sitting in traffic and once I get to the boat, I have a coffee, send some emails, and if I’m lucky I get to see some dolphins or a whale. It’s pretty magical and I’m extremely lucky. And then you get to the island and it’s a lovely place.”

That Neate now works as a brewer in a vineyard is a nice coming together of all the strands in his life.

With a Bachelor of Science in biology he started worked at Hort Research as an entomologist working on bio-control, or “studying insects  eating insects to find ways to minimise pesticides”.

From there he moved into laboratory work at Oyster Bay winery in west Auckland.

“I learned a lot about wine, the flavours, production, the analytical side – and I fell in love with it. I spent seven years chasing vintages, working from labs to cellars.”

After a harvest in France he wanted to be home and was also getting more into beer, circling back to a home brew passion that started as a 16-year-old. 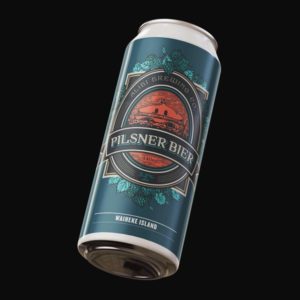 He briefly returned to Oyster Bay while “upskilling and trying to get into brewing industry”.

He did the short brewing course at Massey University in Palmerston North, alongside Andrew Childs (Behemoth) and Brayden Rawlinson (Fork) and landed a job at ephemeral Auckland brewery Governor.

“They solely made lager – a Munich Helles — and I learned a lot about commercial brewing.”

Governor didn’t last long in what might have been a doomed spot in Arch Hill, as the next tenant was the equally-doomed Funk Estate.

A few months later, a mutual connection put Neate in touch with Tantalus Estate, who were looking for a brewer.

Neate worked a vintage on the winery while they waited for the brewery to be installed and started making beer in 2016.

One of the gifts of making beer on Waiheke is the naturally soft water they get from a bore. The water profile is perfect for making pilsners and Neate’s quite proud of the silver medal won by his traditional Czech-style pilsner.

Despite the increased freedoms about to come our way, the Alibi Brewer’s Lounge is not certain to be open over the busy holiday period due to Covid-driven lack of staff. While the vineyard restaurant will open, the Brewer’s Lounge is operating limited hours, Thursday-Sunday.

“The island got a few issues to overcome, staffing being a big one. The island does rely heavily on foreigners for work and because of Covid a lot of people have gone home.”

In the meantime, says Neate, “buy the cans!”

Bread to Brew: the rise and rise of Derelict Brewing